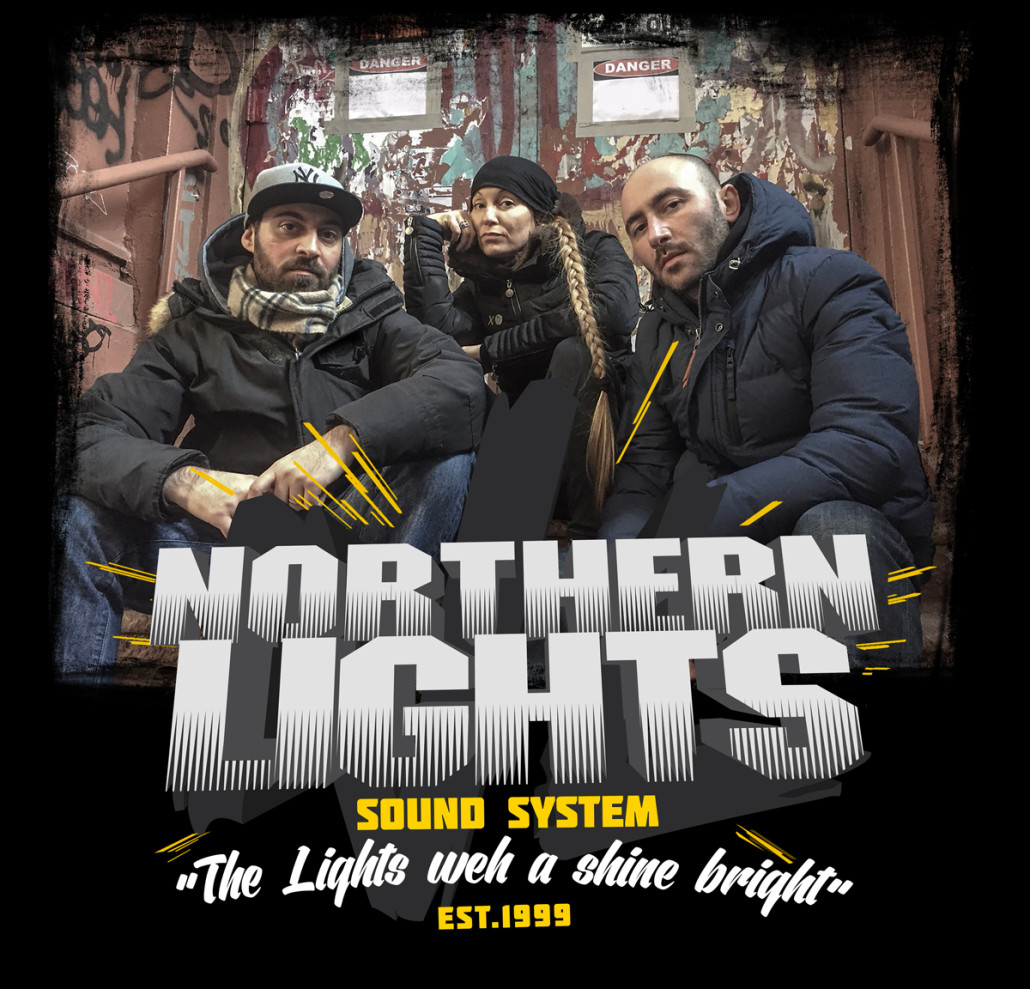 Founded in 1999, after 18 years of activity Northern Lights sound system is still on top of his game, gaining fans, ratings and bookings all over Italy, Europe and the whole world.

Based in a little city called Udine (up in the “Far East Italy” as they love to call it) Northern Lights started from the bottom: from the very first day their aim was to collect all the tools needed to be a real sound station, so after few dances they start to build their sound piece by piece. In every “NL” dancehall they use to (and still they do) ”string up” their own amplifiers and speaker boxes and year after year they organized hundreds of Reggae Dancehall gigs and setted the trend for many other sounds to follow.

Back in 2004 NL did his debut in the sound clash arena against I Shence and after few italian clashes they joined the international arena by clashing sounds like: Heartical (France), Soundbwoy Destiny (Germany), Magash (Switzerland), Warrior (Germany), Foundation sound (Holland).

After a 3 years stop, “the lights weh a shine bright” got successfully back in the arena with a “lock off” perfomance at the “Royal City Clash” that took place in Turin on may 2014.
To defend that title against B.I.D. from Losanne, Switzerland was the first task for 2016 which saw dem victorious with another lock-off sentence.

The following clash, “Worries in the area” 3 months later (this time in Padoa against Rootsman from Canada) ended up with the same shocking result; once again, for the third time in a row Northern Lights managed to win every single round and never let the opponent reach the “dub fi dub” segment.

In july 2016 Northern Lights clashed for the very first time on the UK soil (“Dubplate Kings: Northern Lights vs I-Shence vs Platinum Cartel) where they delivered an impressive performance reaching dub fi dub against that night London’s defender Platinum Cartel. The year 2016 couldn’t be more busy and satisfying than what it was with 3 international clashes, bookings all over Europe, booked for the second time as the host on the main stage and resident sound in the dancehall at “One Love World Reggae Festival” in Italy, resident sound and dancehall area manager at the biggest European Festival “Rototom Sunsplash” and what was probably the best thing to end such a great journey: two dances in Jamaica! The first one in Bog Walk with Top Flava sound and the other one in Spanish Town with Amplex, Bass Odyssey, Metromedia, Jigsy King and Sizzla. Thanks to “Friends for Life promotion” Northern Lights can proudly say they were the first italian sound to play in Spanish Town!!!

2017 saw Northern Lights as the runner up at “War ina East” 2017 in Berlin (April 14th Northern Lights vs King Shine vs Ruffpack vs Mortal Kombat) after an impressive performance just like the following one two months later as the sound repping Italy at the first “Irish and Chin Euro Rumble”; after 5 rounds against some of the most reknowned sound out of Europe, NL managed to take home the trophy and be the first Euro Rumble winner to rep Europe at WorldClash 2017 rep Europe at WorldClash 2017 that took place in Toronto, Canada on October 14 2017. As the sound system world is still talking about NorthernLights worldclash debut, (lost 6 to 3 in dub fi dub against the reigning champion defending the title in his own town) the most befetting words to describe NL performance are the ones used by the Jamaican Star journal: “One of the night’s best-kept secrets, Northern Lights, left an indelible mark. Fyah Ed, Northern Lights’ MC, had the most hard- hitting speeches of the night, backed by numerous ‘bless’ tunes that landed plenty of ‘forwards’ “.

They say “Hard work always pays off” and the outcome of all this hard work isalready here: 2018 scores an historical achievement for Northern Lights since“the lights that shine bright” are scheduled to perform in a soundclash at Amazura, the New York Temple of soundclash, where they will compete in the “Premier League Soundclash” against Yardbeat from Japan and the legendary King Addies.

As the years go by this sound is getting stronger and stronger and ready to conquer every arena, dancehall and massive!!!